Eatmonkey is a download manager that works exclusively with aria2, the ultra fast download utility. It has support for HTTP(s)/FTP, BitTorrent and Metalink files.

The code is currently a draft written in Ruby mainly to avoid wasting too much time fighting either with libsoup or with libsoup's Vala bindings since it is an XML-RPC client to aria2 – not to bash on libsoup but it's less of a trouble to code with a language that has everything instead of using a pile of “here are some functions, do it yourself,” j/k. As a consequence the draft is a features-in-progress that will finally be written in another language once some main goals have been hit. Right now it has support to download/remove/pause files, to tweak the settings and to connect on a remote machine. 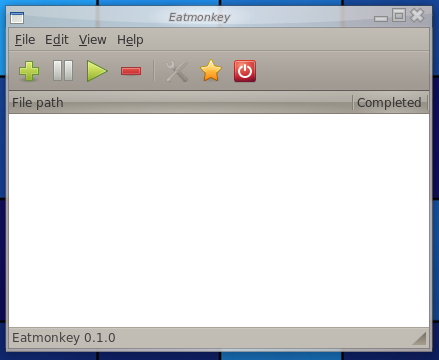 What won't be written yet, at least not in the draft, is a cool compact view as well as a detailed one. Mockups are however available

The current version is written in Ruby and depends on the Ruby-GNOME2 project. It is shipped as individual packages by some Linux distributions. You can find the appropriate package via your package manager, usually it is named ruby-gtk2 or ruby-gnome2.

Now you can already run the application:

If something went wrong let me know and I'll try to help.